Triathlon. A “first time” again. Again I am starting to fulfill one of my childhood dreams. These are the first steps on a path ahead.

It was to experience the procedure of a Triathlon event, to be part of the triathlon community, to know what I am getting into before laying out a road map to achieve a goal I set myself as a child. Olympic distance was my choice to compete in for now. This means to perform a 1500m swim, followed by a 40km bike ride and finished after a 10 km run.

It was to have fun and enjoy a race, hopefully finish it and to grow just a little  bit. I was hardly thinking about what time I would finish. Surly I did the math based on my numbers from my training. But I disregarded these thoughts as pure nonsense, as the sum of the single efforts can not reflect the much more demanding challenge performing a swim, a bike ride and a run after each other.

The sky was covered in clouds. There was little to no wind to hope to clean up the sky. When I entered the Transition Area to setup my spot, 832 my number, it started to rain. Nervous and excited I arrived, a little piece of paper on a metal bar, 832, to hook my bike on. It rains a lot in northern Germany, but for some reasons I got lucky since I moved here and never got surprised by bad weather in my bike training. Commute yes, wet to the bones but not in training. Today at my first Triathlon event water runs down my face before the swim and it is cold.

I step away from the crowd who is busy preparing for a fast transition, putting anti chafing cream to all thinkable spots or already squeezing into their wetsuits. I am not even trying to hide how I check their transition zone setups. Until I realize that I am running out of time to get dressed up too. I jump into my wetsuit, it is a 5 to 10 min long jump, far from elegant and make my last preparations.

We walk down to the harbor. We joke about the weather, I check the course around the buoys and jump into the water. It is freezing cold, despite the wetsuit. I flood the wetsuit and it gets worse. The water is greenish dark, I can hardly see a meter ahead. Did I mention I get panic in deep dark water?

The commentator keeps bubbling his nonsense, nobody listens. Until he says that we would have to do 3 times the course, he corrects himself a little later that we have to do it “only” two times. Suddenly he counts down and a moment later the water explodes. 200 arms hit the surface at once. Noise and no time to think about darkness anymore if I do not want to drown under the bodies of athletes rushing through the water.

The field stretches after a little while and as long we are not swimming around the corner at the buoy everyone has enough space and swimmers are no more stacked above each other. All in all it was pretty respectful behavior but it does not make it easier to find and keep your rhythm. Nor did the cold, the dark grey sky or the rain helped me with the orientation.

A hundred meter before getting out of the water my hamstrings cramp. I swim on my back to take a deep breath, turn around again and let my arms do the work alone.

After roughly 1700 m swim (instead of 1500) I take a few minutes to let the DLRG Life Guard stretch my leg. I get up and run with some pain to my bike, with a smile. I am happy. 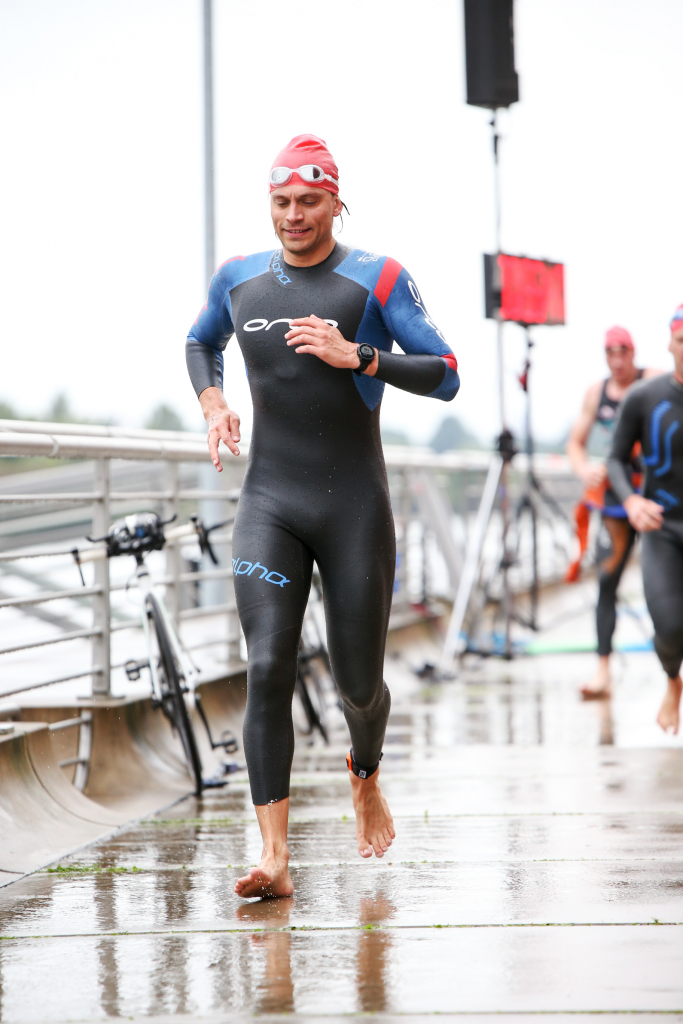 After I have left my spot in the transition zone well organized and clean, I mount my bike. Five minutes into the ride I find my legs. Now! It is race time! No that was not the plan. No, no racing! ….but. 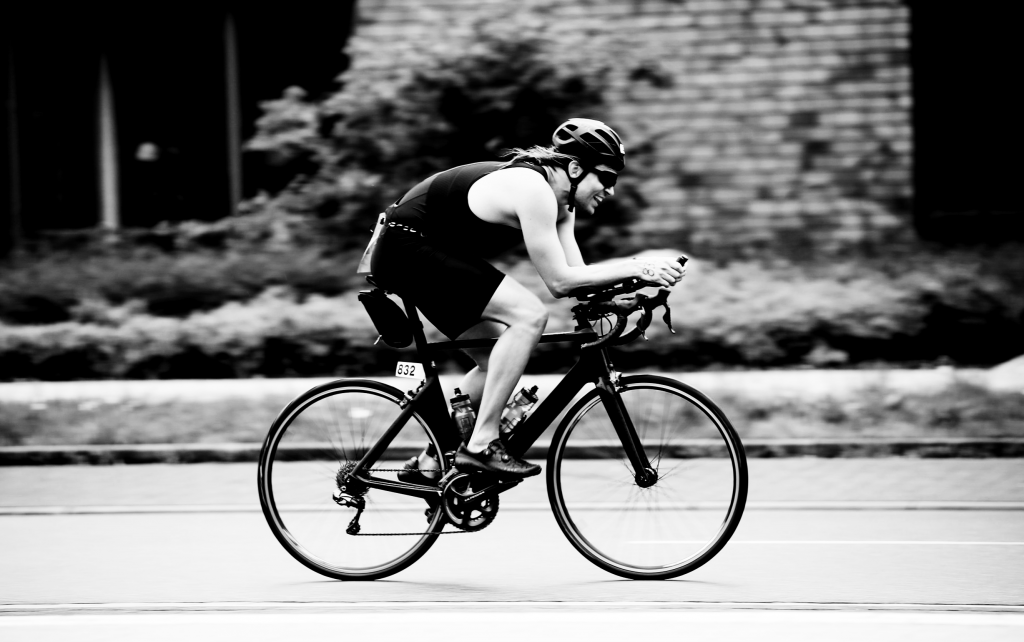 Hitting the pedals, a even whirring sound appears as I accelerate. I start to take over other riders. I am close to a 40 km/h average, controlled, taking my time to slow down for tracks and corners, the road surface is still wet. Four times the same track, at least it is not boringly straight and the rain did stop. There only a few people around the track, but it feels good to see them watching the race. Beside two beasts of riders who passed by, I am the one who is taking over and it feels good. I could have continued that for quite a while. 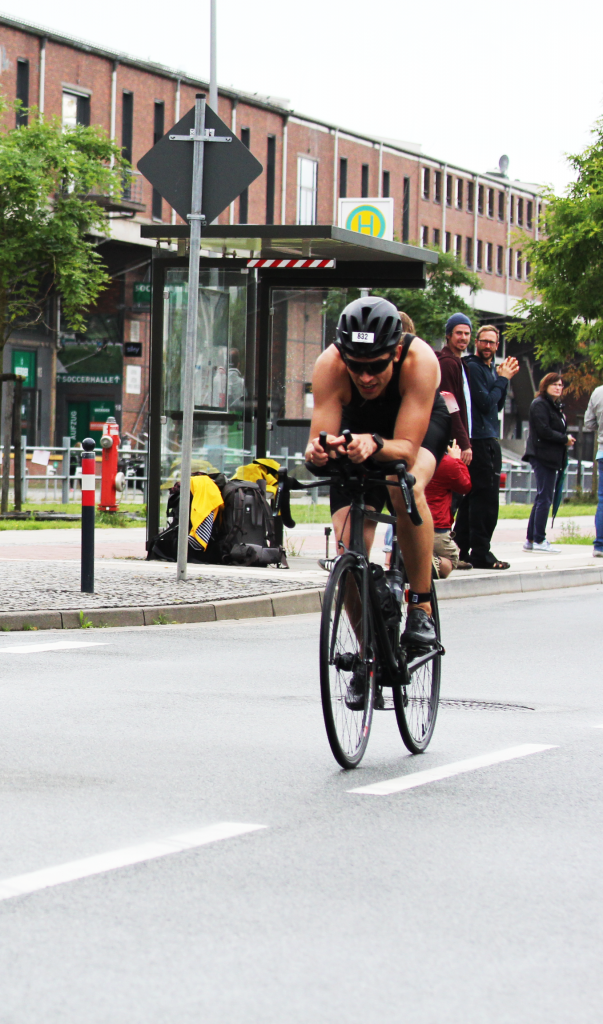 I switched my shoes, even got socks on now and get on the track. 10 km ahead my vastus medialis on both legs feels like iron balls. It really hurts. I had eaten well on the bike and now put in Mg for the second time. Running a low pace and breathing deep and calmly. Smiling.

Another athlete passes by cheering me on “You are doing it, come on, GO! GO! GO!”.  After 2 km in the run it is getting better. As long I am not trying to run too fast I can actually enjoy the scene. There is no more race. It is just me, I am running with. I am grateful for the people cheering me on and for every smile I earn.

I cross the finish line, happy.

This error message is only visible to WordPress admins


Error: API requests are being delayed. New posts will not be retrieved.

Error: API requests are being delayed for this account. New posts will not be retrieved.