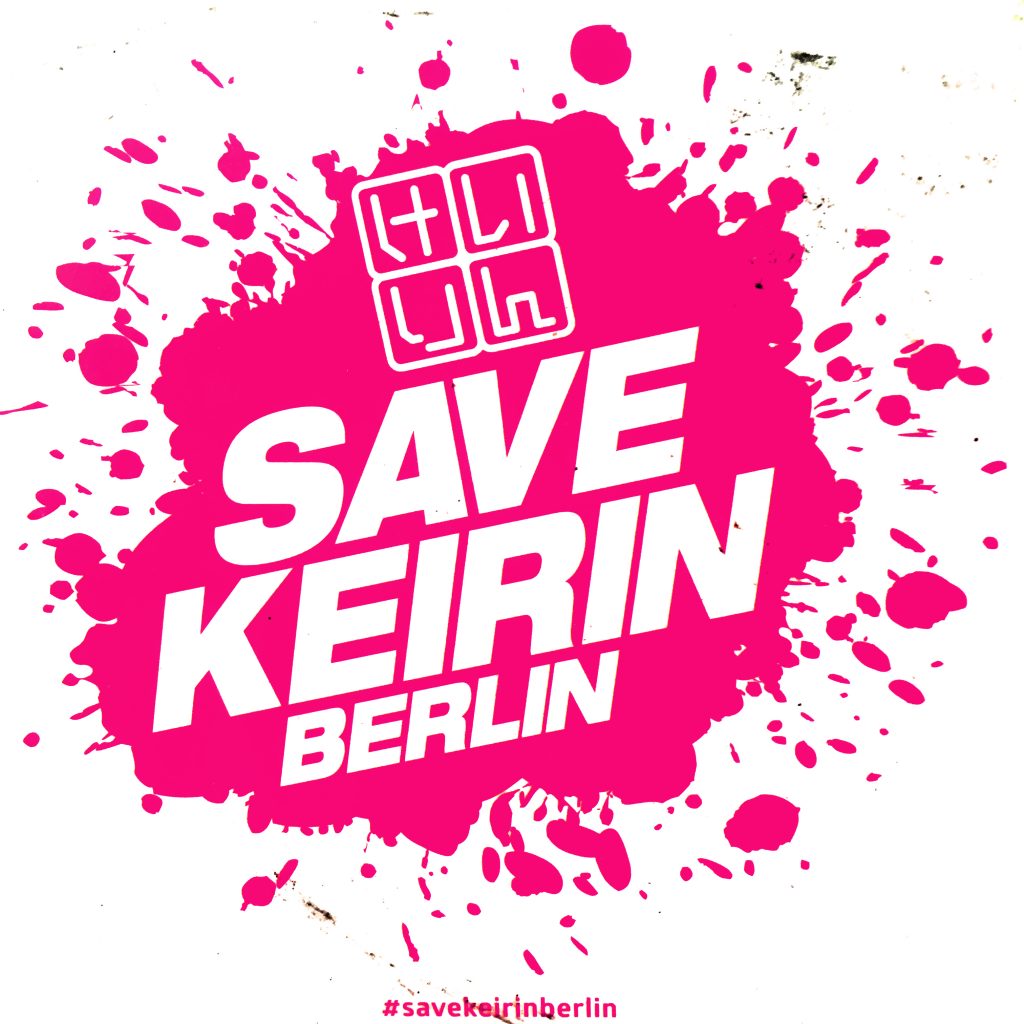 “Save Keirin” – The Beginning?

I had no idea what I was getting into. A bunch of fixed gear cyclists met in front of the infamous Keirin Bike shop at Oberbaum Strasse in Berlin.
Beer and the smell of sweat, tobacco and other substances filled the air. People are joking, women laughing. Messengers, as well as recreational riders, are doing last fixes on their bikes. Everyone is checking their tire pressure. I could not hear the guy who announced the location where to pick up the Manifest.

The Manifests lists the locations to be visited at which a small quest is to be solved to prove your compliance. It is up to the participant to put them in the best order and to navigate between them.

Suddenly everyone jumps on the street. Cars are breaking and using their horns. Adrenaline. A hundred mad cyclists are jumping on their bikes and leaving the place in seconds, into three directions. The Race has begun. But where do I go? I picked one direction and followed the other riders lights. Taking over one by one without knowing the location to go to. I am only following the red backlights in the night.

My hands have been shivering from an overdose of adrenaline pumping through my veins. We meet again under the Soviet War Memorial in Treptower Park. I am hardly able to hold the manifest. I did not know one of the locations or how to get there on time.

Google every spot and spent half an hour planning a route or follow someone else. It became obvious I was not alone in my panic. Packs were forming around seasoned messengers who know the city by heart. I mean like every road, every road signal, the timing of them…

He nodded when I asked him if I could follow his lead. An honour to fly with over 20 years of Berlin messenger experience. I well remember the ride, one hell of a ride. But I can not tell this story. Too many traffic laws were broken each minute in this night. It took me a while after the race to get down from the trip to realize how lucky I was to be still alive. Unfortunately, I am not exaggerating at all.
Someone very dear to me, worrying about my safety every time I step out of the door for a ride, asked me later why I never got back to racing Alley Cats arguing that she never saw me beaming of joy so much. I am thinking… “because you, …I did not know what I am capable of doing and I am afraid of it.”

It feels like being hit by a stump in the back. My latissimus dorsi contracts, squeezing all air out of my lungs. Not relaxing anymore it left me unable to keep an upright posture. I sunk to my knees as people do in movies dying after being hit. It took strong painkillers to endure up to 3 days with this back spasm, not able to stand upright, walk or follow any normal routine.

After 3 years of studying and 3 years of working in the Game Industry, I was 30 Kilo heavier than my “comfortable” weight. I had neglected any athletic activity in that time and my body was ready to argue with me. It always came unexpectedly. When it hit me holding my few months old baby girl on my arm in the bathroom at a baby swimming facility, I sunk to my knees, carefully holding her I knew I have to change. Now.

Some wrong and misleading diagnostics later, like do more sport which made the spasm occur less often but when much worse, I found a sport orthopaedic doctor in Berlin who finally understood the problem. My body was out of balance, a strong primary musculature without the smaller muscles able to balance its strength.

Lots of core, balance and stability training gave me control of the situation. Only to learn how fast I can forget the pain. As soon things got better I got lazy. Again and again, I neglected my routine and it did not take long until I had to pay for it. As one doctor put it who was not entirely wrong “I raised this body to perform, now I will have to perform the rest of my life or suffer.” I needed to find a way to keep myself entertained while taking care of my body. I bought a bike…

No new shiny bike. An old Giant steel road bike. Beside the actual frame, I have replaced each part of it at least once by now. It was and is a loyal companion, though it is looking forward to retirement. Unfortunately, Keirin Berlin closed.  When the time is right I will visit Suicycle in Hamburg, but for now, we still ride together.